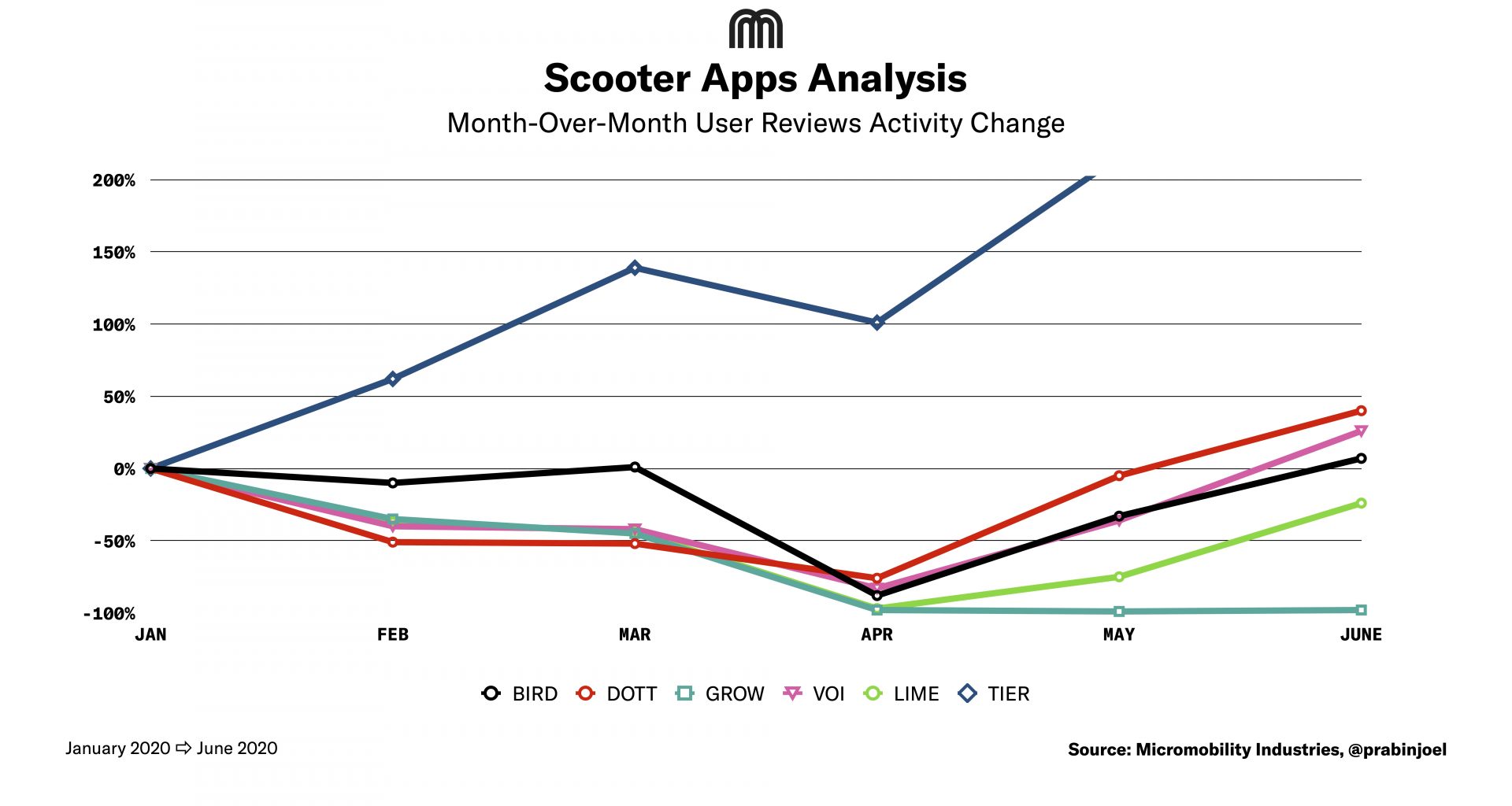 After a difficult stretch for the shared micromobility sector following the outbreak of COVID-19, June was the first month some of the operators saw demand return to January 2020 levels.

The total number of app store reviews continued to grow in June, up by 107% compared to May numbers. Beam saw the biggest growth in activity (217%), followed by Lime (200%).

Overall five operators, Lime, Bird, Spin, Grin, and Voi, accounted for more than 90% of all international app store reviews last month. Lime received an outright majority of the reviews that were written (57.5%).

Lime was also the most-reviewed app in several key markets, including the US, Germany, France, Italy, and Spain. Voi saw the highest review activity in its home country, Sweden (48.3% compared to Lime’s 24.1%). In Belgium, Dott took the top spot with a massive lead (60% compared to Lime’s 20%), perhaps because Lime recently reduced service in the country, while Dott expanded it.

In June, the number of app store reviews returned to January levels for a number of operators for the first time since the pandemic hit. Last months the total number of reviews for Dott, Voi, and Bird were up 40%, 26% and 7% respectively, from their January baselines. Lime’s total reviews have been steadily recovering over the last two months, closing June at -26% below its January benchmark. At this rate, Lime’s activity should return to pre-COVID levels in July. Grin’s app store reviews are still down by 98%, ending last in the list. This could be because of the extended lockdowns related to COVID-19 in South America. Tier, as in previous months, is way ahead of other operators, closing June at with 550% more reviews than it had in January.

Note: The chart above was capped at 200% in order to fit more data points. Tier, an outlier, achieved 550% growth.

Although Lime ranked the best globally, in some key European markets, local players scored higher in customer experience. In Germany and France Voi had a higher NPS than Lime, similar to May. On the contrary, in Sweden, both Bird and Lime scored higher than their European rivals. Lime led in the U.S, Italy Spain as well as Australia.

Though NPS scores don’t change much month to month, Tier’s rating notably did go up 3.04 points since May.

App Issue – 34%: Similar to the previous months, issues with the apps themselves were the most commonly reported problems. Users reported trouble with signup, time to load, and payment setup, among other things. Here are some of illustrative or interesting user comments:

A few users reported a bug in Tier App that wrongly notifies riders that they do not have an active internet connection.

Wind users reported inconsistencies between the availability of scooters in the app versus reality.

Scooter Issue – 19%: The number of hardware problems reported by users declined a bit from May, but they were still the second biggest source of reviews last month. Similar to previous months, there were reports of Lime scooters’ brakes not functioning properly.

Overcharging – 18%: Overcharging by operators was the third most commonly reported issue in June. For Spin, multiple users reported being unhappy that the company placed  a temporary hold of ~$27 on their credit cards. It’s possible some riders did not realize the hold was temporary.

At least two Lime users reported being charged multiple times. Implementation of payments is always a challenge for operators. In scenarios where an initial charge fails or doesn’t return a response, companies normally try to charge the linked payment method repeatedly, until the charge is successful.

It is extremely rare that 100% of the rides are successfully charged to users linked payment methods.

Customer Support, Cost – 17%: Reports of customer support issues spiked in June, mostly because of an update in the Bird app that made it difficult for users to reach the brand’s helplines

Similar to previous months, India-based Yulu saw complaints from users who did not receive their security deposit refunds.

A few users simply found their scooter service to be too expensive last month.

Unable Start/End Ride – 12%: Many users reported being unable to start or end their rides in the app. Two Bird users reported that it took 15 and 30 minutes, respectively, to do so.

Geofencing remains a point of confusion for many users. In most cities, scooter operators set up virtual perimeters around real-world geographic areas to enforce things like speed limits, parking restrictions, and no-ride zones. These invisible boundaries are shown only in the apps, which a rider cannot access during a trip without checking their mobile phone. The result is that many users navigate into restricted service areas unknowingly, causing their vehicles to slow down or stop without warning. Making matters more complicated, scooter companies change the perimeters of their geofences as often as once a month, creating even less navigational reliability for users.

For better customer experience, micromobility operators should develop hands-free systems for notifying users when they are entering a restricted area.

Here are some user comments:

@prabinjoel
511 Following
796 Followers
Job creation should be our focus for the next years to help those people that lost their livelihoods during the pan… https://t.co/yglLUcoWsK
17 hours ago
When working from home, positive impacts of smart lights that mimic sunlight are underestimated. Buying a bunch of… https://t.co/VAFljI9BAi
22 hours ago
lol! :D https://t.co/B5nvLeBU0l
yesterday
Follow