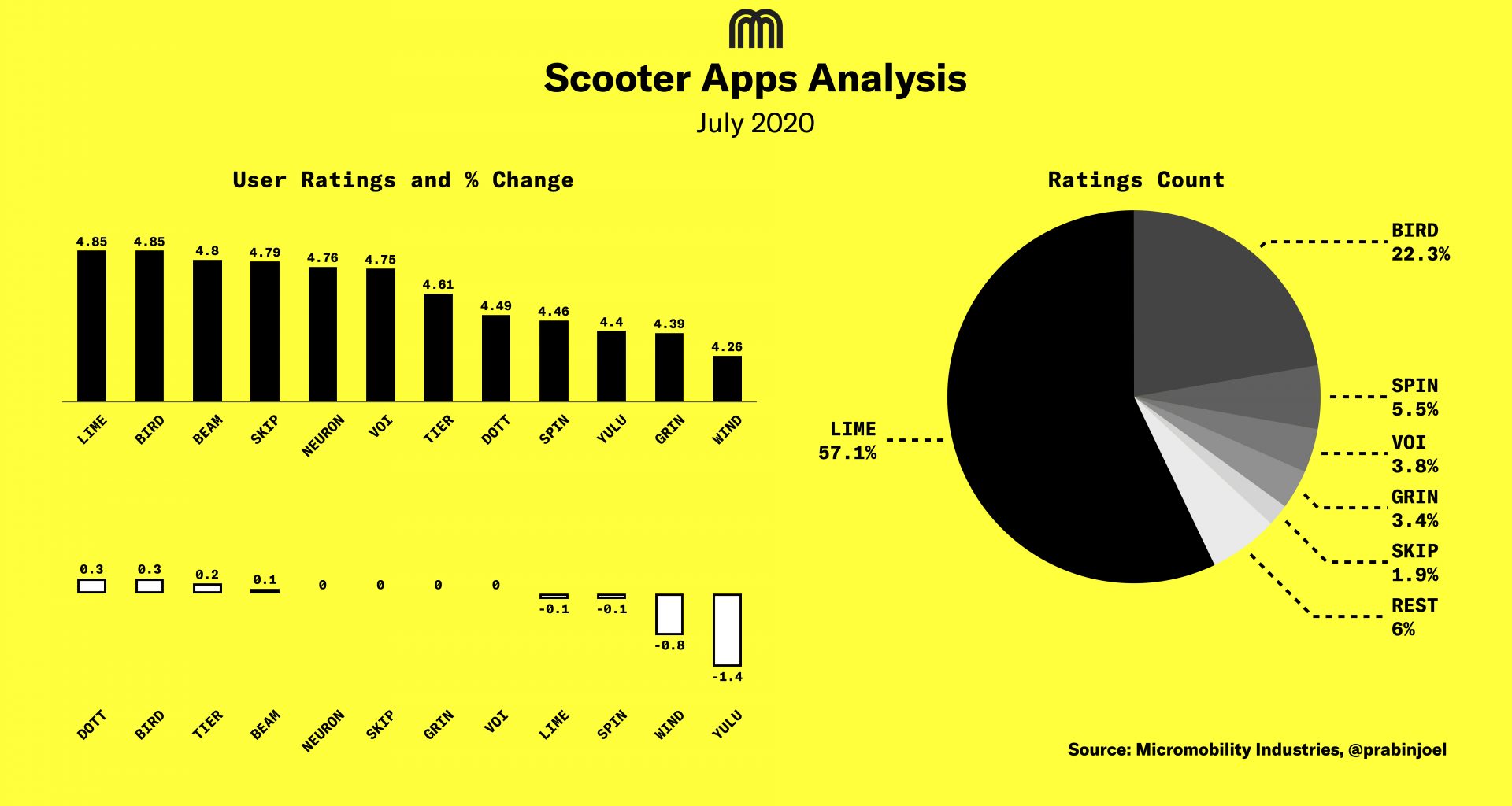 Will Bird overtake Lime to be the best rated micromobility app in the world? Almost!

Bird closed in on Lime to level at 4.85/5 sharing the top spot as the best rated micromobility apps in JULY. Change in overall satisfaction remained stable similar to previous months, with Dott and Bird improving their ratings by 0.3% while India based operator Yulu dropping by 1.4% followed by Wind (-1.4%).

The total number of app store reviews continued to grow in July, up by 32% compared to June numbers. Beam saw the biggest growth in activity (126%), followed by Spin (91%).

Lime was also the most-reviewed app in several key markets, including the US, Germany, France, Italy, and Spain. Voi saw the highest review activity in its home country, Sweden with a massive lead of 57.9% compared to Lime’s 21.1%). In Belgium, Lime reclaimed the the top spot from Dott (50% vs 33%). In France, Tier had just 1.3% of the share of all App Store ratings last month. This share should improve in the coming months given that they won both Paris and Lyon e-scooter tender.

In July, the number of App Store reviews remained stable for most operators, staying at par or above the January levels. Total number of reviews of Voi and Bird were up 100% and and 70%, with Dott dropping a little (-3%) from their January baselines. Lime’s total reviews have been steadily recovering from April bottom, closing July at -13% below its January benchmark. Grin’s app store reviews are still down by 98%, ending last in the list. Grin will continue to stay at these levels until there is significant improvement in the current COVID19 situation in South America. Tier, as in previous months, is way ahead of other operators, closing July at with 486% more reviews compared to January.

In July, Lime continued to retain the top spot with a NPS score of 91.68, followed by Bird (89.99) and Beam (88.6). Tier added 1.33 points to their NPS score, continuing their growth similar to previous months.

Although Lime ranked the best globally, in some key European markets, local players scored higher in customer experience. In Germany and France and Italy, Voi had a higher NPS than Lime, with Lime losing the top spot in Italy to Voi in July. On the contrary, in Sweden, both Bird and Lime scored higher than their European rivals. Lime led in the U.S (94), Spain (88), Portugal (90), New Zealand (92) as well as Australia (93). Both in Australia and New Zealand, smaller rival Beam is closing in on Lime with an NPS score of 91 in both markets.

App Issue – 39%: Similar to the previous months, issues with the apps were the most reported. Users reported trouble with signup, payment setup and annoying notifications among other things. Here are some of illustrative or interesting user comments:

Above comment is from a Lime user and it was reported by few other users as well.

Did operators start pushing out notifications at a higher frequency in July? Multiple Lime and Bird users reported annoying notifications. Users giving consent to notifications is precious – use it wisely!

Scooter Issue – 18%: The number of hardware problems reported by users declined a bit from June (19%), but they were still the second biggest source of reviews last month. Similar to previous months, there were reports of issues with brakes in Lime scooters

Overcharging – 14%: Overcharging by operators was the third most commonly reported issue in June. Lime seems to have issues in the way subscription packages/passes are implemented. Users reported having charged more for the rides, on top of the subscription cost.

Customer Support, Cost – 18%: More people found the service expensive in July compared to previous months. Bird seems to have partially solved the Customer Support issues that they had in June. Here are some issues reported by users:

Here are few comments from users who found the service expensive.

Unable Start/End Ride – 11%: Many users reported being unable to start or end their rides in the app. Bird scooters continue to have issues with Unlocking and locking.

A Neuron mobility user reported to have issues, as the ride ends only when the helmet is relocked. We will see similar issues reported by users in Chicago as the second Pilot requires operators to have a physical lock attached to the scooters and the ride ends when the user locks the scooters to a pole/bike rack, takes a picture and uploads it.

In addition to these issues, there were multiple reports from users on confusion around geofences and zones. This still remains an unsolved user experience problem. Users of e-scooters want to hop on a scooter and go to the destination, without any route planning to be sure that their routes doesn’t cross no-ride zones, where they could be locked out.

With the current implementations, users get locked out few hundred meters into the no-ride zone or when the users releases the throttle. Only way out of this is to drag the beeping scooter back into the geofence or get charged a hefty fine.

I don’t know of any scooter operators other than Link/Superpedestrian using a quick response solution that prevents users from going far into a no-ride zone.

A good implementation would be to alert the user much before the no-ride zone using the available screens or gradual deceleration. I hope micromobility operators are busy solving this issue.

India based Yulu has been having issues related to refund of the security deposit for the last few months and they haven’t managed to solve it.

@prabinjoel
511 Following
796 Followers
Job creation should be our focus for the next years to help those people that lost their livelihoods during the pan… https://t.co/yglLUcoWsK
17 hours ago
When working from home, positive impacts of smart lights that mimic sunlight are underestimated. Buying a bunch of… https://t.co/VAFljI9BAi
23 hours ago
lol! :D https://t.co/B5nvLeBU0l
yesterday
Follow