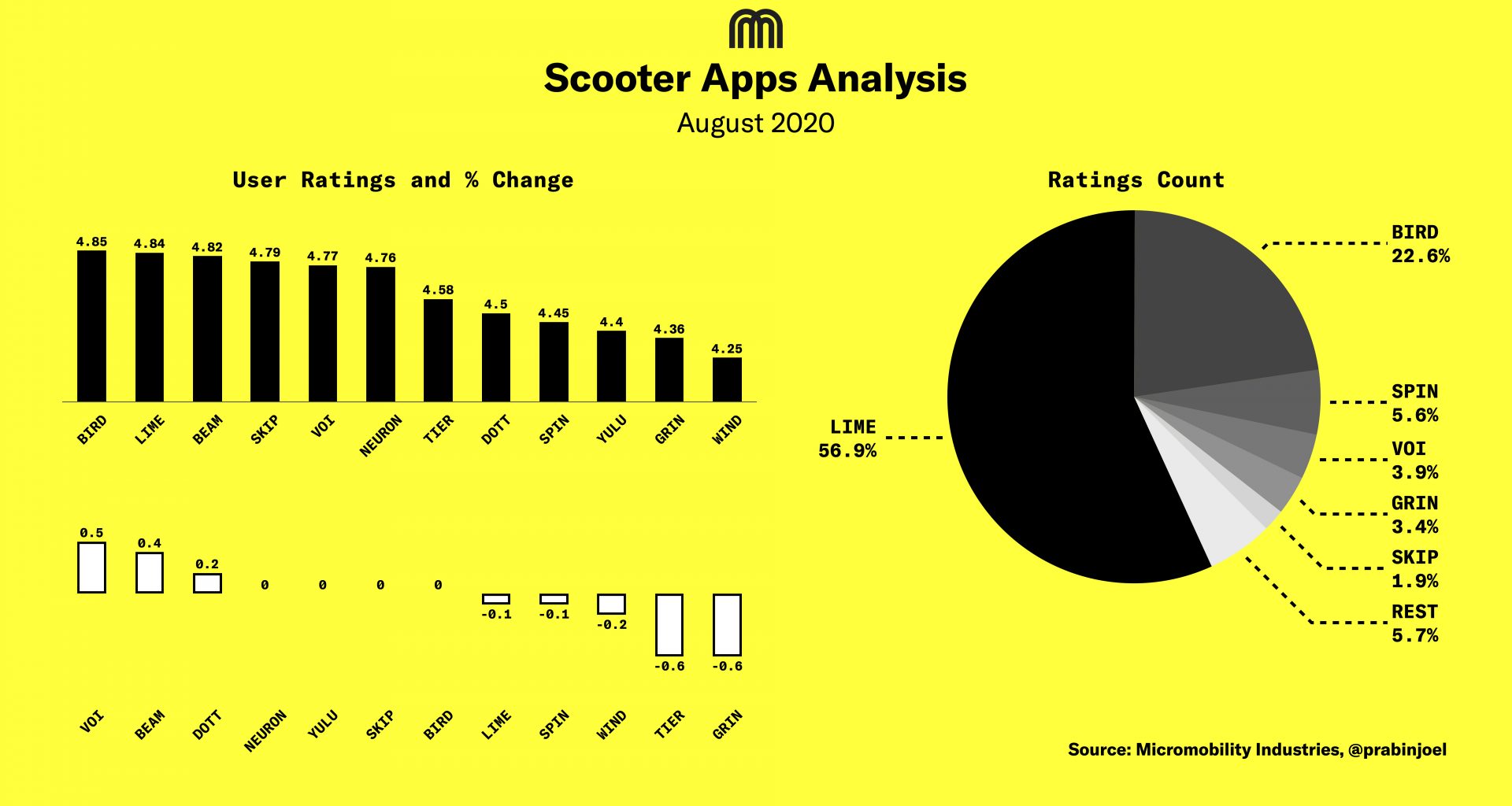 Bird overtook Lime to be the best rated micromobility app in the world. Lime dropped in ratings with increased number of issues related to their day pass and payment system.

With 4.85/5, Bird claimed the top spot in average user rating followed by Lime at a close second (4.84/5) in August. Change in overall satisfaction remained stable similar to previous months, with Voi and Beam improving their ratings by 0.5% and 0.4% respectively while Tier and South America based Grin dropping by 0.6%.

The total number of app store reviews dropped in August, by 5% compared to July numbers. Wind saw the biggest growth in activity (115%), followed by Yulu (86%).

Lime was also the most-reviewed app in several key markets, including the US, Germany, France and Spain. Voi saw the highest review activity in its home country, Sweden with a massive lead of 58.3% compared to Bird’s 26.3%). In France, Tier improved the percentage of ratings from 1.3% to 2.5% last month.

In August, the number of App Store reviews remained stable for most operators, but few saw a drop compared to January levels. Total number of reviews of Voi and Bird were up 106% and and 75%. Lime’s total reviews have been steadily recovering from April bottom, but closed August at -27% below its January benchmark. Grin’s app store reviews are still down by 98%, ending last in the list. Grin will continue to stay at these levels until there is significant improvement in the current COVID19 situation in South America. Tier, as in previous months, is way ahead of other operators, closing August at with 397% more reviews followed by Beam (278%) compared to January.

Although Lime ranked the best globally, in some key European markets, local players scored higher in customer experience. In Germany and France and Italy, Voi had a higher NPS than Lime. On the contrary, in Sweden, both Bird and Lime scored higher than their European rivals. Lime led in the U.S (94), Spain (88), Portugal (90), New Zealand (92) as well as Australia (93). Both in Australia and New Zealand, smaller rival Beam is closing in on Lime with an NPS score of 91 in both markets.

App Issue – 34%: Similar to the previous months, issues with the apps were the most reported but with a little improvement from 39% in July to 34%. Users reported trouble with signup, payment setup and annoying notifications among other things. Here are some of illustrative or interesting user comments:

Interestingly, once you create an account with Tier, you cannot logout of the App. Browsing the app, I did not find a ‘logout’ option either.

Scooter Issue – 17%: The number of hardware problems reported by users declined a bit (~1%) from July (18%), but they were still the second biggest source of reviews last month. Similar to previous months, there were reports of issues with brakes in Lime scooters.

A regular Lime user who previously mentioned about faulty Lime Scooters ended up with a broken leg as the front week broken Bucharest.

There was also another Lime user with a wonder leg

A SPIN user had a rather common and dangerous issue with the throttles.

A Tier scooter got locked in the middle of a ride throwing the user to the ground.

Overcharging – 16%: Overcharging by operators was the third most commonly reported issue in June. Over the last months, there has been increasing reports on issues with Lime’s payment system where users are overcharged. Lime hasn’t yet solved issues in the way subscription packages/passes are implemented. Users reported having charged more for the rides, on top of the subscription cost.

What happens when you implement day pass, but you also have a parking option which is not taken into account in the day pass?

Multiple Bird users reported a strange $20 debit on their credit cards. I’m not sure if Bird is experimenting on a hold on the credit card before ride to ensure that the user have enough credit to pay for the ride – a usual problem with the rise of easy to get prepaid cards from Revolut, N26, etc.

Voi also, seem to be trying a €5 hold on cards before ride start.

It is an expected trajectory for companies to put in place fraud prevention methods as the industry matures. It is yet to be seen how users would respond to multiple holds on payment cards.

Customer Support, Cost – 21%: More people found the service expensive in August compared to previous months. Here are some of the comments

A Tier user reported that the company did not get back for nine days and counting.

Increasingly, more users find e-scooters expensive (9% in July to 12% in August), as we have new users trying to use scooters, moving away from Public Transport.

Unable Start/End Ride – 12%: Many users reported being unable to start or end their rides in the app. Here are some comments:

A Bird user tried unlocking 10 scooters in a row and none worked!

SPIN users continue to have issues with ending their ride, in some cases waiting for 5 to 10 mins to end the ride.

As mentioned in the July report, one of the user experience challenges that e-scooter operators have to solve is alerting users on no-ride zones, and slow zones. Today, if you go into a no-ride zone, scooters come to a standstill 100+ meters later and in some scooter models, not until you release the throttle.

Lime scooters have a screen and I hope that they make use of it to alert users on time. The recent Voi scooters have a bunch of indicators which is good, but none to alert users about no-ride zones. LINK/Superpedestrian is the only company today with a quick response system where the scooters come to a stand still much earlier – though, I’m not sure of how a “full throttle” case is handled.

Also, an interesting edge case in micromobility – What happens if your phone is dead during a ride? How do you end the ride? Here a Wind user reported such a case: