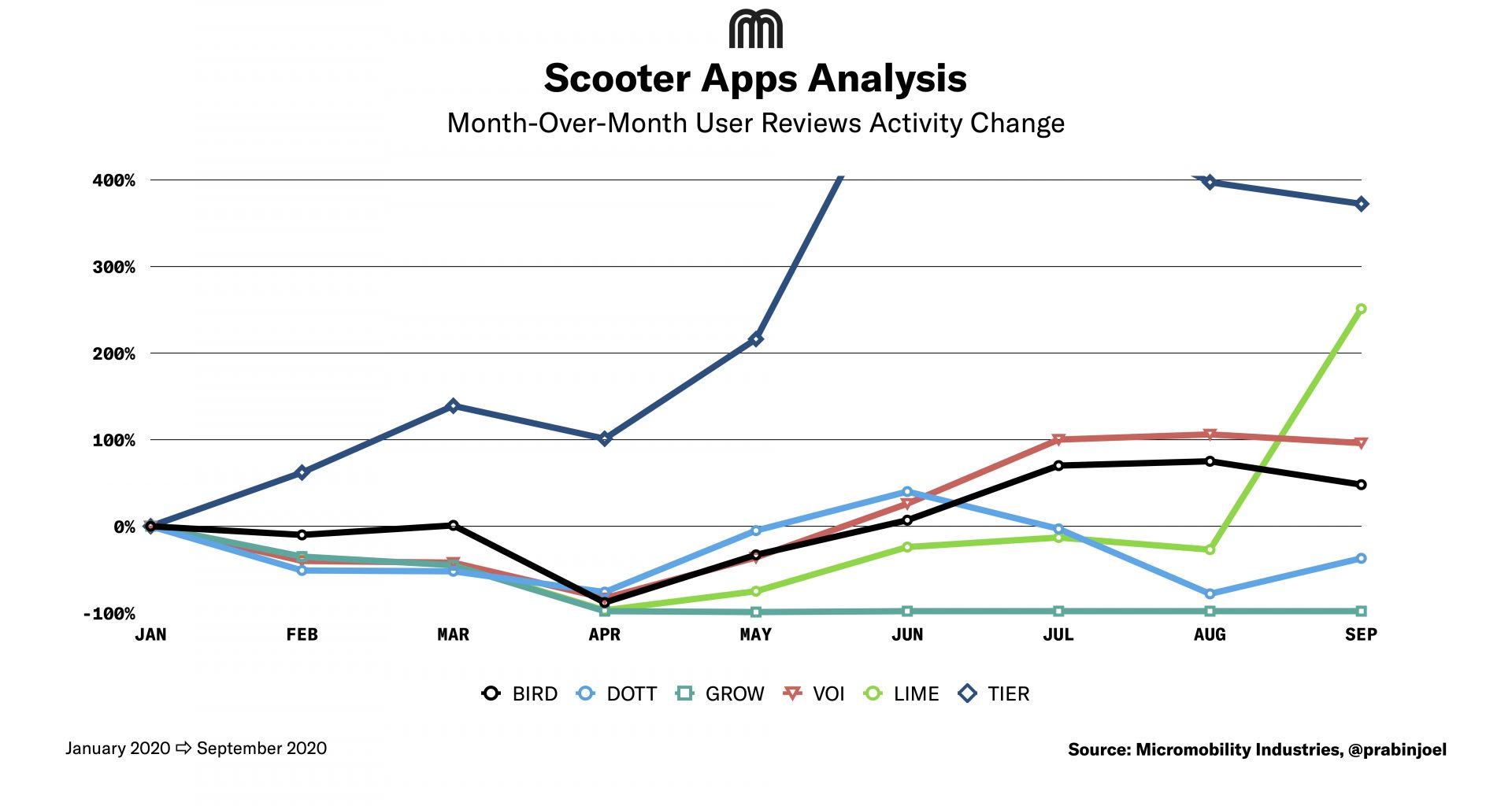 Bird and Lime are back to sharing the top spot (4.84/5) as the best rated micromobility apps in September, a title that they shared in July while Bird claiming the top spot in August. Voi made the largest leap (1.3%) among all operators to claim a very close second spot (4.83/5). It is important to note that the Google Playstore ratings of Voi went from 3.9 in August to 4.7 in September.

Yulu and Voi improved their overall ratings by 1.3% while Wind and Beam dropped by 0.6%.

The total number of app store reviews went up in September, by 108% compared to August numbers. Lime saw the biggest growth in activity (380%), followed by Dott (187%).

Lime was also the most-reviewed app in several key markets, including the US, Germany, France and Spain. Voi saw the highest review activity in its home country, Sweden with a massive lead of 57.7% compared to Bird’s 15.4%). In France, Tier improved the percentage of ratings from 2.5% to 5.8% last month.

In September, the number of App Store reviews were above January levels for most operators. Maintaining a steady recovery, Lime is above January baseline for the first time in the last eight months – up 251%. Total number of reviews of Voi and Bird were up 96% and 48%. Grin’s app store reviews are still down by 98%, ending last in the list. Grin will continue to stay at these levels until there is significant improvement in the current COVID19 situation in South America. Tier, as in previous months, is way ahead of other operators, closing August at with 372% more reviews compared to January. Asia based Beam saw a massive 600% increase over January numbers.

Although Lime ranked the best globally, in some key European markets, local players scored higher in customer experience. In some of the largest markets in Europe like Germany and France and Italy, Voi had a higher NPS than Lime. On the contrary, in Sweden, both Bird and Lime scored higher than their European rivals. Lime led in the U.S (94), Spain (88), Portugal (90), New Zealand (92), South Korea (87) as well as Australia (93). Both in Australia, South Korea and New Zealand, smaller rival Beam is closing in on Lime with an NPS score of 91, 86 and 91 respectively. In UK, Lime took the top spot (93), closely followed by Voi (92).

App Issue – 55%: Similar to the previous months, issues with the apps were the most reported, with a massive increase from 34% in August to 55% in September. Users reported trouble with signup, payment setup and annoying notifications among other things. Here are some of illustrative or interesting user comments:

Many Lime, Voi, Beam and Spin users mentioned issues related to ID card verification. It is interesting to note that Micromobility operators now verify users – indicating a new level of maturity in the market. Micromobility services started with allowing users to quickly hop on an e-scooter without spending much time on registration. In the last six months, we observed that operators moved to have quality rides – rides that result in a successful payment. They achieved this with applying a temporary hold on the credit cards before a ride. Now, operators moved to the next level, trying to have quality customers – verified for age, possession of a Driver’s license etc.

Here are some comments related to ID Verification.

Even after few months of issues related to passes, Lime did not fix those issues yet. This time, in addition to issues with day pass, there were new issues with Monthly Pass.

Scooter Issue – 12%: The number of hardware problems reported by users declined from August (17%), but they were still the second biggest source of reviews last month.

Here are some comments:

A Voi user reported bike going on a lock mode after a brief period of parking, during an ongoing ride. Voi seems to have a protection mechanism to avoid users from being charged in excess, when they leave the bikes at their destination without ending the ride on their app. In this case, it worked against the user.

Overcharging – 11%: Overcharging by operators was the third most commonly reported issue in September.

Lime users continue to get charged more, eventhough they have day or monthly passes.

A Tier user reported having bought a deal where the user was granted 9,999 ride minutes, that expired in 24hrs!

Unable Start/End Ride – 14%: Many users reported being unable to start or end their rides in the app. Here are some comments:

Customer Support, Cost – 8%: Less people found the service expensive in September compared to previous months. Here are some of the comments

A Voi user wrote a comment, expressing disappointment over the price of a monthly pass

If you are an operator, did you think about scenarios where mobile phones go kaput, or get stolen during a ride?

A Yulu user reported what seems to be an organised Crime buy Yulu workers or some people pretending to be Yulu workers.

@prabinjoel
510 Following
796 Followers
Job creation should be our focus for the next years to help those people that lost their livelihoods during the pan… https://t.co/yglLUcoWsK
16 hours ago
When working from home, positive impacts of smart lights that mimic sunlight are underestimated. Buying a bunch of… https://t.co/VAFljI9BAi
21 hours ago
lol! :D https://t.co/B5nvLeBU0l
yesterday
Follow