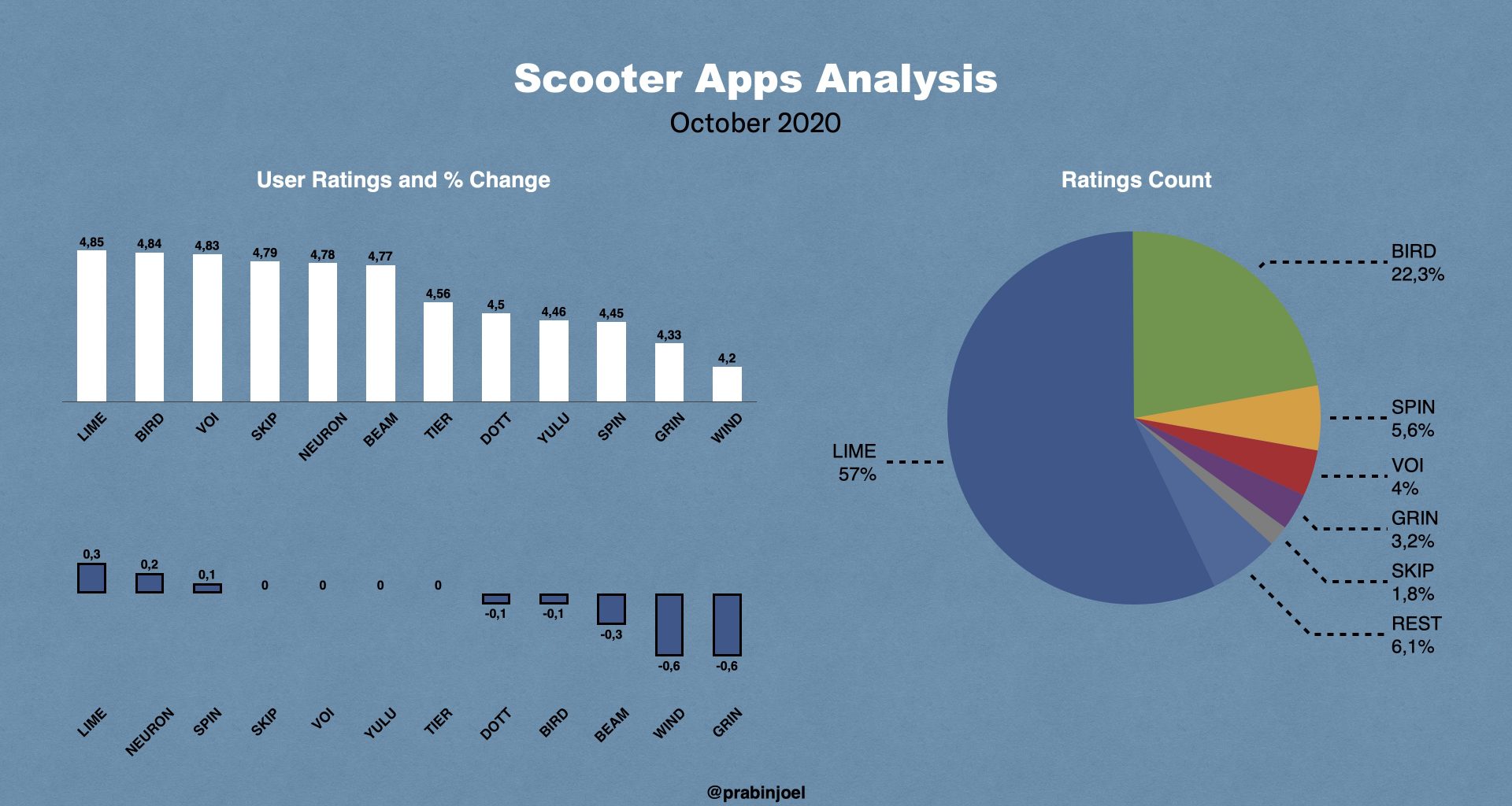 Lime improved its ratings in October, to become the top rated micromobility app (4.85/5) – a title shared by Bird and Lime in September. Bird and Voi hold the second and third spot with 4.84 and 4.83 respectively. Change in overall satisfaction remained stable similar to previous months, with Lime and Neuron Mobility improving their ratings by 0.3% and 0.2% respectively while Wind and South America based Grin dropping by 0.6%.

The total number of app store reviews dropped in October, by 45% compared to September numbers. Dott saw the biggest growth in activity (99%), followed by Neuron Mobility (42%).

Lime was also the most-reviewed app in several key markets, including the US, Germany, France and Italy. Voi saw the highest review activity in its home country, Sweden with a massive lead of 60.3% compared to Lime’s 13.8%). In Belgium, Dott reclaimed the the top spot from Lime (75% vs 12.5%). In France, Lime was the most reviewed (40.2%), closely followed by Dott (32.7%).

In October, the number of App Store reviews remained above January levels for more than half of the tracked operators. Total number of reviews of Voi and Bird were up 43% and and 28%, compared to their January baselines. Lime’s total reviews have been steadily recovering from April bottom, closing October at 36% above its January benchmark. Grin’s app store reviews are still down by 98%, ending last in the list. Grin will continue to stay at these levels until there is significant improvement in the current COVID19 situation in South America. Tier, as in previous months, is way ahead of other operators, closing October at with 297% more reviews compared to January.

Although Lime ranked the best globally, in some key European markets, local players scored higher in customer experience. In some of the largest markets in Europe like Germany and France and Italy, Voi had a higher NPS than Lime. On the contrary, in Sweden, both Bird and Lime scored higher than their European rivals. Lime led in the U.S (94), Spain (88), Portugal (90), New Zealand (92), South Korea (87) as well as Australia (93). Both in Australia, South Korea and New Zealand, smaller rival Beam is closing in on Lime with an NPS score of 92, 84 and 91 respectively. In UK, Lime took the top spot (93), closely followed by Voi (92).

App Issue – 41%: Similar to the previous months, issues with the apps were the most reported, but dropped from 55% in September to 41% in October. Users reported trouble with signup, payment setup and annoying notifications among other things. Here are some of illustrative or interesting user comments:

All issues with Lime app summed up by a user:

Lime has not fixed issues with day and monthly passes yet, though these issues are being reported regularly by users in the last months.

With operators implementing ID verification to have quality, verified users, some of them did not appreciate this additional step. Here is a comment from a Voi user:

Overcharging – 19%: Overcharging by operators was the second most commonly reported issue in October.

Lime users continue to get charged more, eventhough they have day or monthly passes.

I hope that Lime would fix this issue soon, as Lime lost the top spot two months ago because of the issues.

Should you have a refund option when working with Wallets?

Like the ID verification issue, some users did not understand the concept of placing a ‘hold’ on the credit cards. Operators should explain it in the app that the money is not actually debited.

Scooter Issue – 16%: The percentage of hardware problems reported by users increased from 12% in September to 16% in October.

A Lime user reported having an accident because of failed brakes

A Spin user tried ~15 scooters and most of them did not have enough charge.

Tier continues to have issues with phone holders. This time, one more user broke a phone because of faulty phone holders

Customer Support, Cost – 13%: More people found the service expensive in October compared to previous months. Here are some of the comments

Customer Support channels of Bird not up yet, with help chat in the app throwing errors:

Unable Start/End Ride – 11%: Many users reported being unable to start or end their rides in the app. Here are some comments:

A Lime user tried unlocking 7 scooters, but there seems to be a glitch

Similar to previous months, Spin continues to have issues with ending rides.

Issues related to no-go zones, parking zones etc. are common for all operators, with no solution found till date. Scooters stop more than 100m after crossing a no go zone.

A Tier user summed up this issue well:

A new way of scamming e-scooter user, exploiting the fact that a ride cannot be ended when the scooter is on the move?

What protection do operators have, if the phone battery dies mid-trip? Voi seems to have a feature where the ride auto-ends, if the scooter is stationary for a certain duration. Other operators don’t seem to have any protection in place.

But, what happened when you actually stop to say, take pictures and the scooter is stationary?

@prabinjoel
561 Following
1K Followers
Bird ($BRDS) down 16% Helbiz ($HLBZ) down 21%
about 1 hour ago
What's the best micromobility company out there? Now that we know the financials of some of the European operators… https://t.co/nBOFsccqxX
8 hours ago
Follow