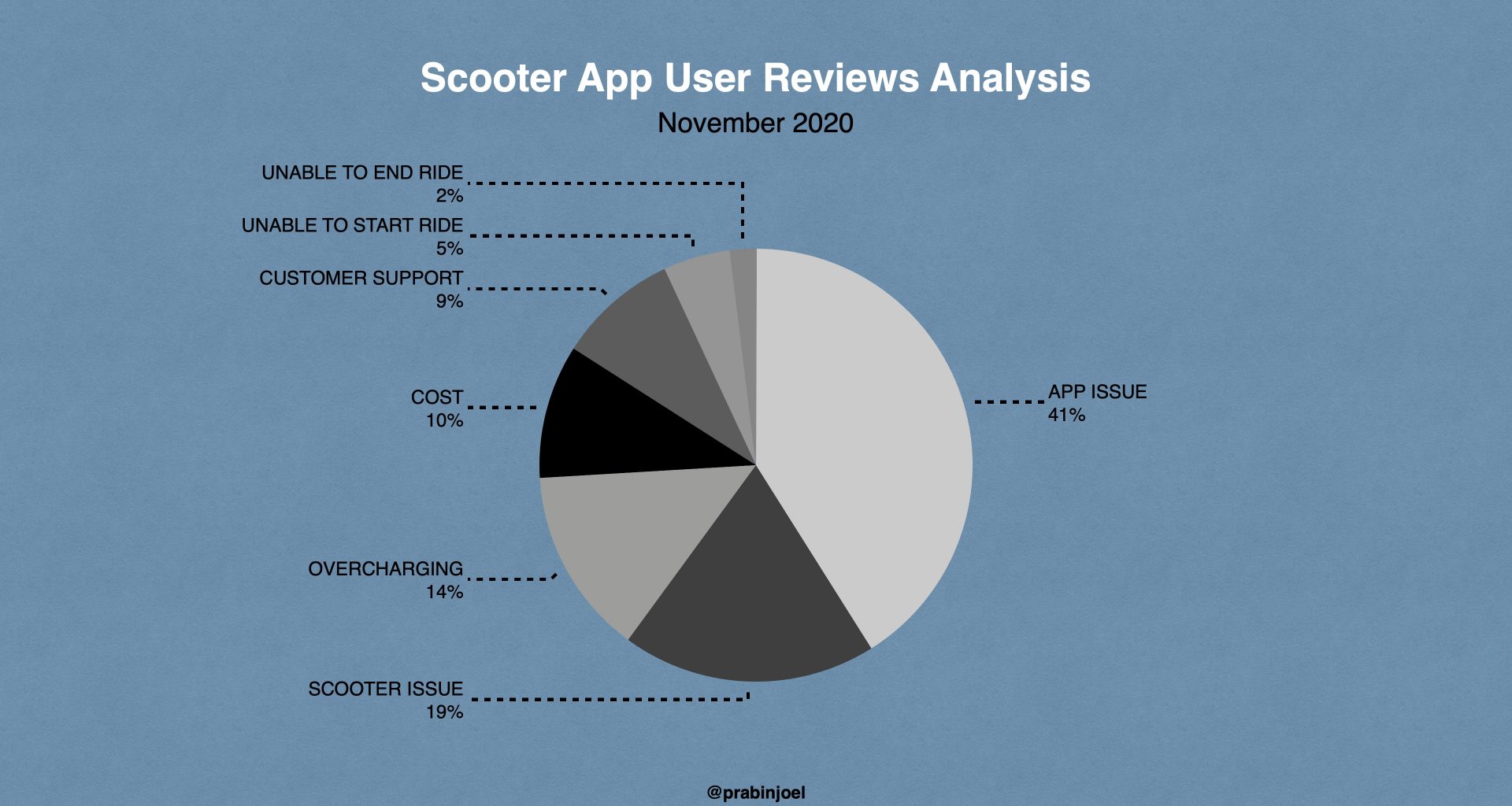 After few month of positive signs, there seems to be a slowdown in November, with many countries re-introducing lockdowns because of COVID.

In November, Lime continued to hold the top spot in App Store user ratings (4.88/5), among all micromobility companies. Bird and Voi hold the second and third spot with 4.84 and 4.83 respectively. Change in overall satisfaction remained stable similar to previous months, with Dott and India based Yulu improving their ratings by 1.6% and 1.3% respectively while Bird and Wind dropped by 0.1% and 0.2%.

The total number of app store reviews were down by 35% compared to September numbers. Beam saw the biggest growth in activity (42%) while SKIP dropped by 82%

Lime was also the most-reviewed app in several key markets, including the US, Italy and Germany. Voi saw the highest review activity in its home country, Sweden with a massive lead of 55.6% compared to Tier’s 22.2%) and Voi also lead in the UK (72.5%). In France, Dott saw the highest activity (46.2%) followed by Lime (30.8%).

In November, the number of App Store reviews were a bit below January levels for most of the tracked operators due to COVID19 linked lockdowns across the globe. Total number of reviews of Beam and Tier were up 381% and 163%, compared to their January baselines. Lime’s total reviews have been steadily recovering from April bottom, closing November at 24% below its January benchmark. Grin’s app store reviews are still down by 98%, ending last in the list. Grin will continue to stay at these levels until there is significant improvement in the current COVID19 situation in South America.

Although Lime ranked the best globally, in some key European markets, local players scored higher in customer experience. In some of the largest markets in Europe like Germany and France and Italy, Voi had a higher NPS than Lime. On the contrary, in Sweden, both Bird and Lime scored higher than their European rivals. Lime led in the U.S (94), Spain (88), Portugal (90), New Zealand (92), South Korea (87) as well as Australia (93). Both in Australia, South Korea and New Zealand, smaller rival Beam is closing in on Lime with an NPS score of 92, 84 and 91 respectively. In UK, Lime and Voi took the top spot (92), followed by Tier (88).

App Issue – 41%: Similar to the previous months, issues with the apps were the most reported, but stayed the same in percentage as October. Users reported trouble with signup, payment setup and annoying notifications among other things. Here are some of illustrative or interesting user comments:

Lime recently pushed out an update with a Dark UI and some users are confused!

With operators adding an additional layer of Driving License verification, it adds additional points of failure in the onboarding flow. Normally, these verifications are not instant and can take anywhere from few seconds to a few minutes. Here is a comment from a SPIN user:

Voi had the most number of negative comments on Driving License verification:

At this rate of move towards having only users with a valid Driving license, very soon, e-scooters won’t be available for many users, especially those who don’t have a Driving License and rely on bikes, public transit and e-scooters.

Scooter Issue – 19%: The percentage of hardware problems reported by users increased from 16% in October to 19% in November.

Here are some comments from users:

A Dott user reported injury after unexpected acceleration of the scooter:

A scooter user of India based Yulu scooters reported error in battery status and stopping in a busy road:

Overcharging – 14%: Overcharging by operators was the second most commonly reported issue in November.

Did Lime solve the day pass issue yet? Though the number of negative comments have come down, the issues is not fully solved:

Disadvantages of having distance based billing. How do you make sure that the distance measurement is correctly calibrated? Here a Yulu user was charged for 32km when in reality it was only 10km:

Bird seems to have issues with Promos:

Customer Support, Cost – 19%: More people found the service expensive in November compared to previous months. Here are some of the comments:

And, Bird is indeed expensive than other operators in certain cities:

It is a growing trend among operators to define parking zones in cities and force users to park only in these zones. But, what if the GPS is not accurate enough? Here is a disappointed Lime user reporting the issue:

Some cities mandate operators to have an additional lock-to mechanism. Here is a comment from a Bird user:

One of the issues with ‘free-floating’ e-scooters is the numerous restrictions in cities with no-go zones, slow zones and no-parking zones. Multiple restrictions would mean that the users would have reduced origin-destination pairs.

Users don’t necessarily check the destination and the routes they would take for 1 to 2km with e-scooters. As most users use e-scooters as an alternative to walking, having a slow zone (~8kph) would mean that they don’t have any advantage over walking, except for those calories conserved.

In the next iteration of e-scooter tech, routing and guiding users so that they avoid slow zones and be sure that they can end the ride at the destination will be important – in addition to accurate GPS .

@prabinjoel
556 Following
907 Followers
May is not over yet, but layoffs are reaching 2020 Covid levels already! https://t.co/dvTfvkcsmK
4 hours ago
Stock exchanges in India have a daily circuit limit to reduce volatility. Comes as a savior during down turns. For… https://t.co/SDmuPQaDo2
7 hours ago
Bird entered into an agreement with YA II PN, Ltd. (“Yorkville”) for $21m worth of promissory notes. Interestingly… https://t.co/GhegUTvAwW
14 hours ago
Follow