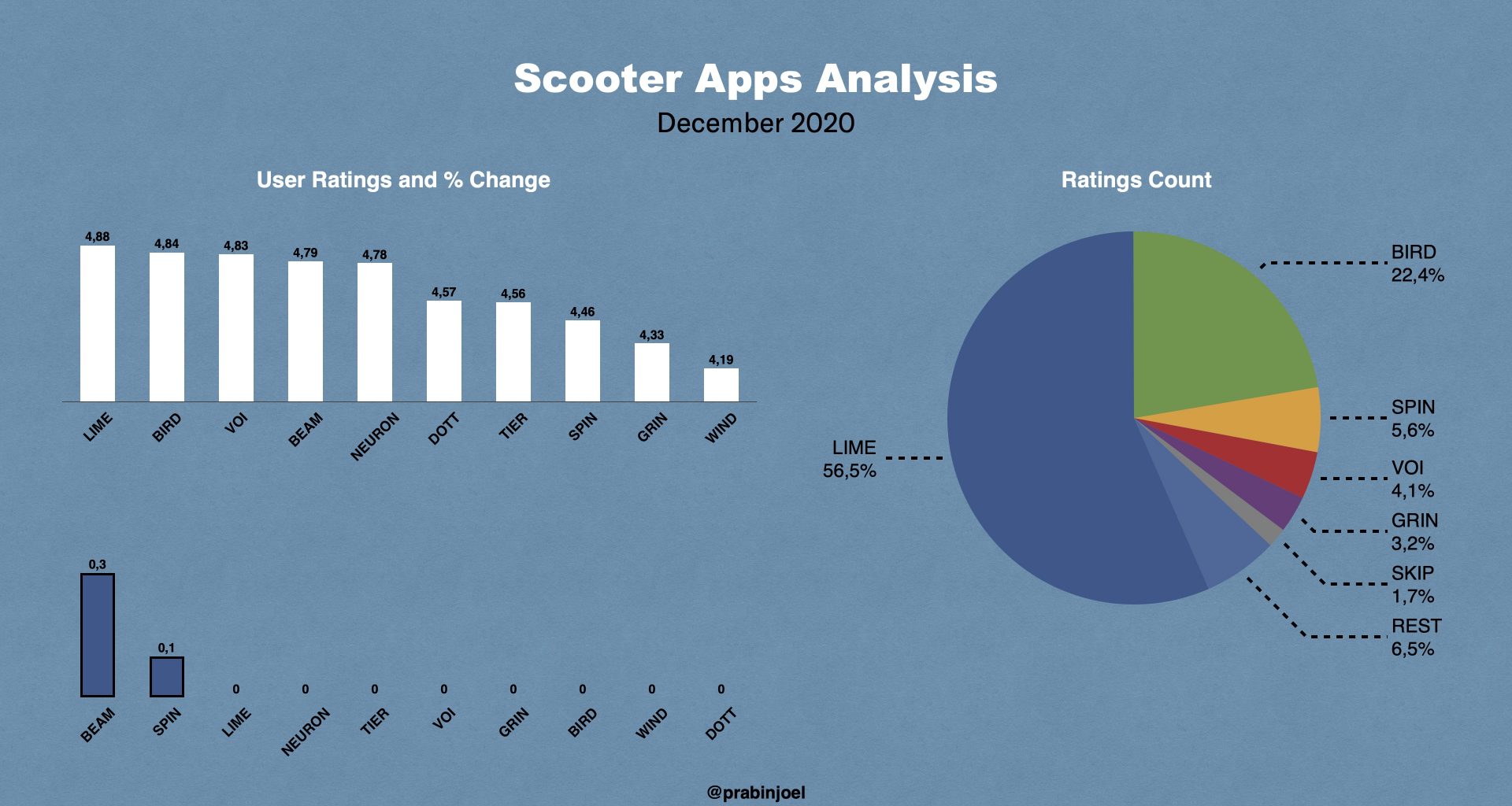 In December, Lime continued to hold the top spot in App Store user ratings (4.88/5), among all micromobility companies. Bird and Voi hold the second and third spot with 4.84 and 4.83 respectively.

The total number of app store reviews were down by 34% compared to November numbers. Neuron Mobility saw the biggest growth in activity (34%) while LIME dropped by 60%

Lime was also the most-reviewed app in several key markets, including the US, Italy and Germany. Voi saw the highest review activity in UK, with a massive lead of 75.8% compared to Lime’s 17.5%. In France, Dott saw the highest activity (35.7%) followed by Lime (28.6%).

December was not a great month for Micromobility sharing companies due to the expected Winter lows and the extended strict lockdowns across the globe. Total number of reviews of Beam and Neuron Mobility were up 235% and 107%, compared to their January baselines. Lime closed December 70% below January 2020 benchmark. Grin’s app store reviews are still down by 99%, ending last in the list followed by SPIN (-77%). Grin will continue to stay at these levels until there is significant improvement in the current COVID19 situation in South America.

Although Lime ranked the best globally, in some key European markets, local players scored higher in customer experience. In some of the largest markets in Europe like Germany and France and Italy, Voi had a higher NPS than Lime. On the contrary, in Sweden, both Bird and Lime scored higher than their European rivals. Lime led in the U.S (94), Spain (88), Portugal (90), New Zealand (92), South Korea (87) as well as Australia (93). Both in Australia, South Korea and New Zealand, smaller rival Beam is closing in on Lime with an NPS score of 92, 84 and 91 respectively. In UK, Lime took the top spot (93), followed by Voi (91).

App Issue – 46%: Similar to the previous months, issues with the apps were the most reported in December. Users reported trouble with signup, payment setup and Driver’s License among other things. Here are some of illustrative or interesting user comments:

GRIN users have “Unknown Error” thrown when using the app

Voi app users reported that they couldn’t use the app as the App did not detect an active internet connection.

Wind Helmet system seems to have a malfunction, where a returned helmet was not detected by the scooter resulting in additional charges

Scooter Issue – 20%: The percentage of hardware problems reported by users increased slightly from 19% in November to 20% in December.

A Lime user reported issues with brakes resulting in a crash

What can operators do if a user unlocked a defective scooter? A good way to address this issues it to combine time and mileage data to decide on charging the user or not.

Overcharging – 17%: Overcharging by operators was the second most commonly reported issue in December.

Customer Support, Cost – 9%:  Less people found the service expensive in December compared to previous months. There were also low number of reports on Customer Support issues. Here are some of the comments:

A SPIN user reported physical abuse by their staff

Some operators haven’t warned users in advance yet, that a Driver’s License verification is necessary to use the vehicles

Next big thing in mobility is Behaviour change!

@prabinjoel
556 Following
907 Followers
May is not over yet, but layoffs are reaching 2020 Covid levels already! https://t.co/dvTfvkcsmK
3 hours ago
Stock exchanges in India have a daily circuit limit to reduce volatility. Comes as a savior during down turns. For… https://t.co/SDmuPQaDo2
6 hours ago
Bird entered into an agreement with YA II PN, Ltd. (“Yorkville”) for $21m worth of promissory notes. Interestingly… https://t.co/GhegUTvAwW
13 hours ago
~65% of startups selected by @sequoia are B2B startups.. https://t.co/yhZkmgk4J7
13 hours ago
Follow