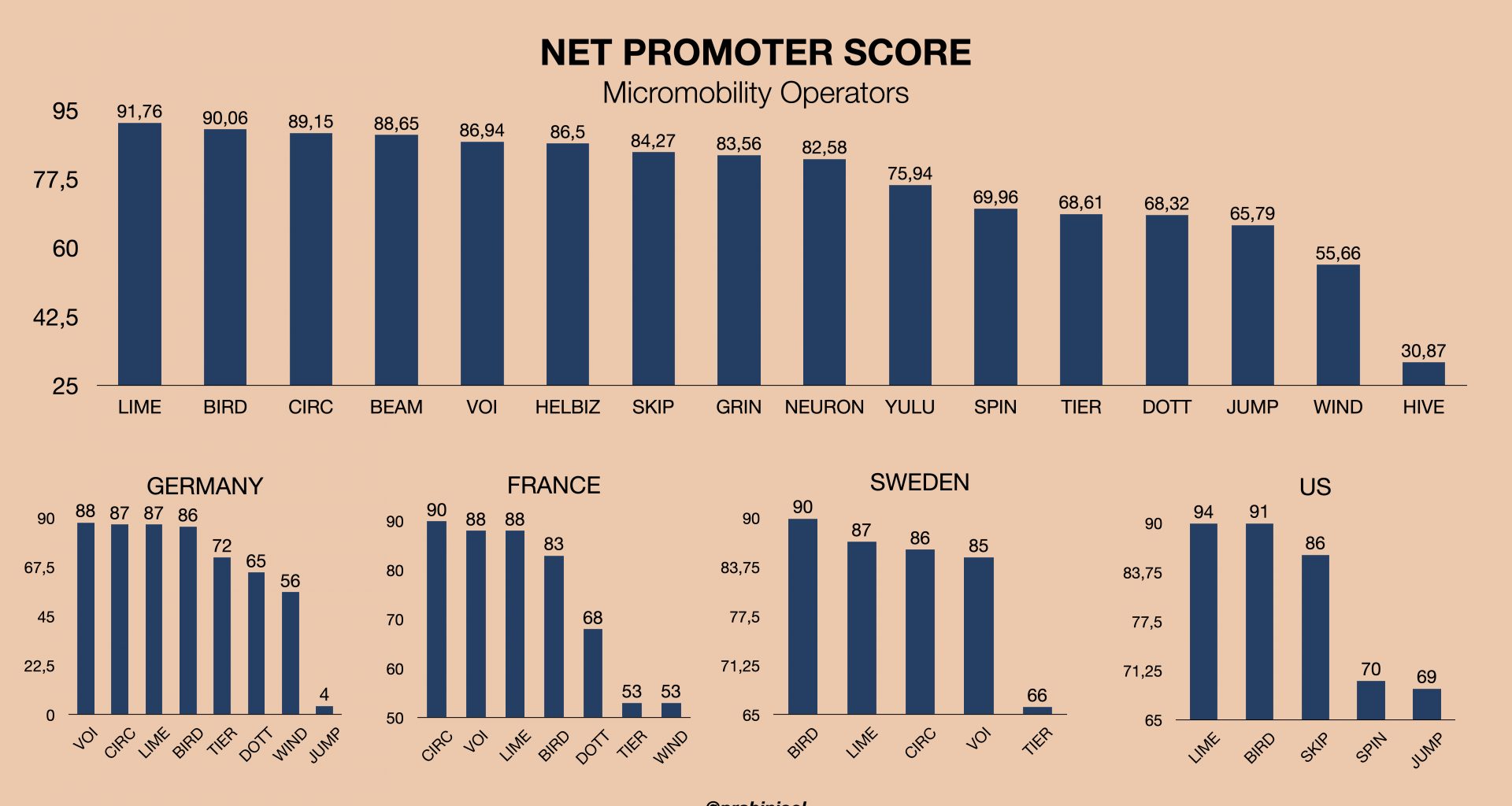 From the time I started my journey in micromobility, my quest for knowledge in this sector led me to many sources, but nothing gave me first hand information on what the users think. I started skimming through the App Store reviews to understand what users like and what they dislike. This eventually became a monthly learning activity for me, and sometime last year, I decided to publish the my learnings every month, as a monthly reviews update.

Recently, when I posted the March update on Micromobility Industries Triple M slack channel, Horace Dediu popped a question on the Net Promoter Score data. With the amount of data that I collect, in fact, it should be easy to calculate a Net Promoter Score (NPS) for each operators – with a bit of deviation from the traditional 11 point scoring system.

Net promoter score is a tool or a scoring system to quantify a company’s customer loyalty. Generally, this is done on a 11 point scale (0 – 10), where companies ask users on their satisfaction level – 0 is the lowest and 10 the highest.

Users can be classified in to the following based on the rating:

Promoters are high value customers who would spread the good word, use services often, get their network to use the services and would pay more themselves. Passives neither promote nor spread negative word. Detractors are users who don’t like your service, and definitely will stop others from using/ trying your services.

In the case of micromobility the data that I collect are from App Stores and the ratings are on a scale of 1 – 5, a 5 point scale rather than a 11 point scale. For NPS calculation, we will apply the following, trying to keep it as close as possible to the 11 point scale:

Above chart gives a view on the Net Promoter score globally and for different markets – Germany, France, Sweden and the US in this case based on the data snapshot at the end of March.

As you can see, this give a very different view from just tracking the user ratings. You can read more on the March update of user ratings here.

Though Lime has the highest rating globally, in key European markets, local players seems to have better customer loyalty. In Germany and France, Voi and Circ have higher NPS score compared to Lime. In Sweden, both Bird and Lime scored higher than their European rivals.

Micromobility, especially scooter sharing is a premium offering, that requires premium service and high levels of customer loyalty. Focussing on Customer experience is extremely important to have high value customer, who would promote your services, use them often and spend more!

If you would want to see the NPS score for operators in your market, do send me a message with the list of operators form the global list (see chart) and I shall update the blog with those charts.

Note: Data gathered from 150+ Apple and Google app stores across the globe. If interested in more insights on the data collected, do send me a message! Though Circ is now part of Bird, for this analysis they are treated as separate entities.

How much did Bird and Lime pay for their scooters? - Segway/Ninebot IPO facts

@prabinjoel
556 Following
907 Followers
May is not over yet, but layoffs are reaching 2020 Covid levels already! https://t.co/dvTfvkcsmK
3 hours ago
Stock exchanges in India have a daily circuit limit to reduce volatility. Comes as a savior during down turns. For… https://t.co/SDmuPQaDo2
6 hours ago
Bird entered into an agreement with YA II PN, Ltd. (“Yorkville”) for $21m worth of promissory notes. Interestingly… https://t.co/GhegUTvAwW
13 hours ago
~65% of startups selected by @sequoia are B2B startups.. https://t.co/yhZkmgk4J7
13 hours ago
Follow