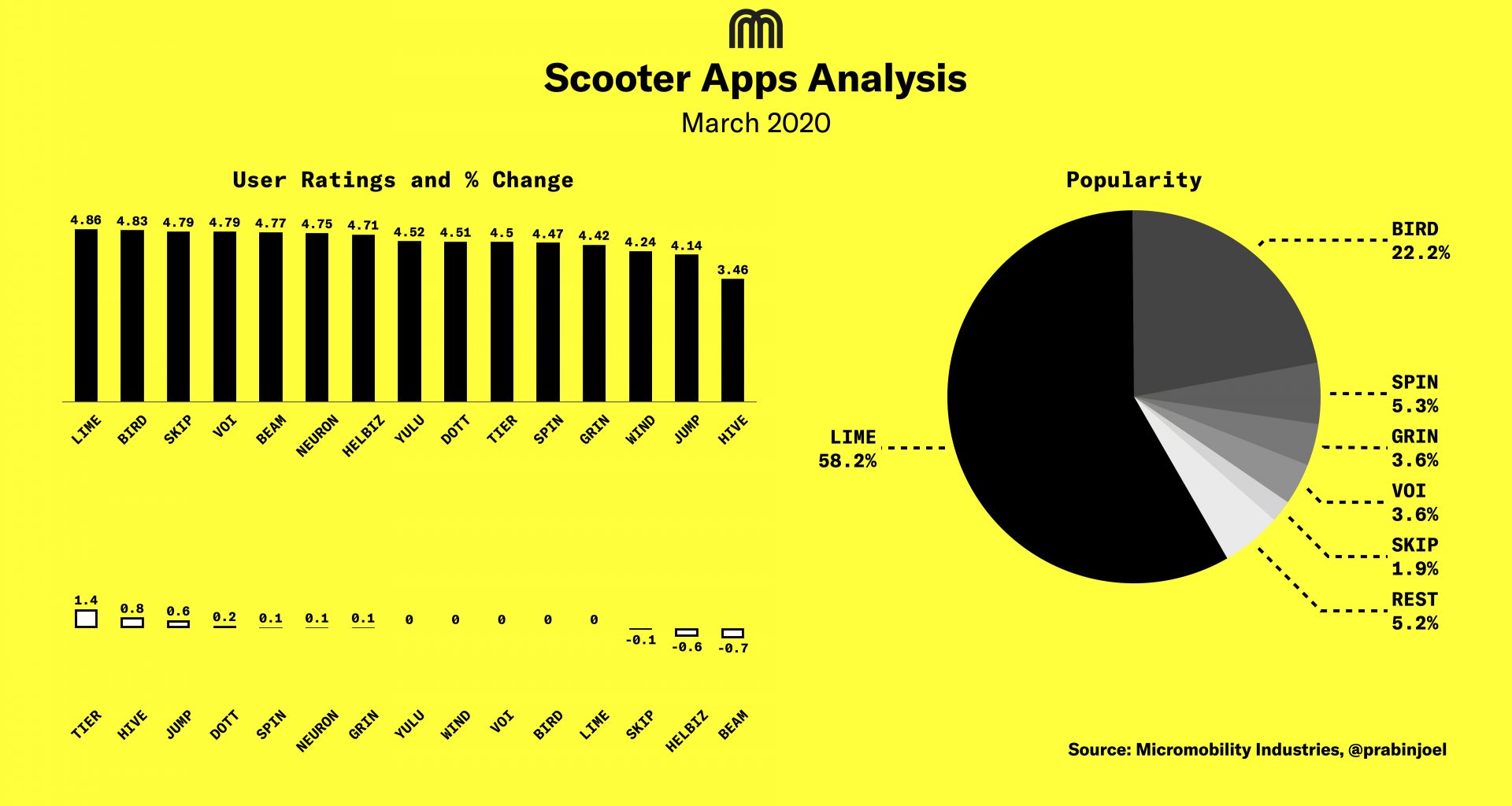 March was a historically difficult month for micromobility, with most operators partially or completely shutting down operations because of COVID-19. While App Store data cannot tell us how ridership is changing in absolute terms, it can provide us with insight into how the different micromobility companies are faring relative to one another in the eyes of customers in these uncertain times.

In March, Lime continued to hold the top spot in App Store user ratings (4.86/5), among all micromobility companies. Lime also saw the highest App Store activity, as measured by the number of user reviews, among all the players worldwide.

The total number of App Store reviews fell 8% compared to February data, as people traveled less and fewer scooters were put in circulation due to COVID-19 concerns. Hive’s activity declined the most month-over-month (-52%), followed by Skip (-50%). Despite the challenging circumstances, Tier and Wind actually saw their App Store activity increase by 48% and 39%, respectively, versus February. Viewed as standalone entities, Bird App Store activity spiked about 60% in March compared to its February numbers, while Bird-subsidiary Circ saw its activity collapse by 60%.

Viewed as a single company, Bird/Circ owned 22.2% of the pie last month in terms of total App Store activity, well behind Lime, which controlled 58.6%. Neuron Momobility saw the largest month-over-month increase in App Store activity (14.3%), followed by Beam (8.4%) and Tier (8.1%).

Going through all user-reported issues in March from the App Stores’ comment sections, most of scooter issues can be grouped into the following categories:

App Issue – 28%: Bugs related to the sharing app were the most-reported user problem in March, similar to the previous month (34%). Users reported issues with login, time to load, payment setup, and more. There were two reports where users couldn’t enter the zip code under payment information, thereby preventing them from renting a scooter.

One user claimed that the Bird app requested access to their phone’s microphone. This may have been an isolated incident related to a recent app update, because neither the Android or iOS versions of the Bird app currently list microphone access under permissions.

Grin’s decision to remove Facebook authentication appears to be hurting its standing among users who use their social media account to log into the scooter app.

Others reported they had difficulty with the onboarding process.

Scooter Issue – 12%: Problems with the scooters themselves are a common source of frustration, with many reporting failing brakes, low batteries, and devices shutting down midway through trips. The percentage of issues related to devices remained the same as in February.

One Bird user claimed  that their scooter accelerated involuntarily, resulting in an accident.

A few users complained about the uphill performance of vehicles, including a set of users who wrote about Jump bikes and Lime scooters.

Surprisingly, there are still reports on vehicles with dead batteries.

In a repeat of last month, another user reported that a faulty phone holder on a scooter resulted in a shattered screen..

Cannot Start/End Ride – 13%: Starting and ending rides continue to be problem points for many users, especially the latter. About 8% of total user-reported issues were related to  ending a ride—a marginal improvement over last month (10%). Users reported multiple cases where an app started the trip timer, but the vehicle did not unlock. This is a classic case where operators do not check on the state of the vehicle before firing up the counter.

The time it takes between the user to unlock the device on the app unlocking and the vehicle to unlock itself, as well as the time between  the user completing the trip and ending the ride on the app shouldn’t take more than 5 seconds each. Users of Spin reported locking taking more time (~3mins) to end ride and this seems to have happened multiple times for different users.

Customer Support, Cost, Overcharging, Others – 47%: There were more reports on issues with customer support in percentage in March (5%) vs February  (3%). In the App Store, Voi responded to almost all the negative reviews it received. Tier did the same as well, but stopped responding in mid-March. There are many operators who do not respond to messages posted on the App Store at all. It is important that operators interact with users who post negative reviews as they are a source of valuable learning, and if a solution is provided, those users might be willing to increase the rating.

There were multiple reports where operators debited cash from user credit cards without authorisation, only to refund a few days later. Users were also not happy with vehicles disappearing from the streets when operators stopped service because of COVID19.

In line with what we hear from a Bird scooter monthly rental user in the Micromobility Industries Triple-M channel, users are not happy with Bird stopping the monthly rental of scooters.

There were multiple reports across the globe of users arriving at their destination, only to find that it is located in a no-parking zone. In other cases, users reporterd their scooters slowed down or shut off completely as they rode them into  slow-zone or a no-entry zone. From a users’ perspective, most of them do not check on these zones before renting, or they are simply not aware that these zones exist. It is also difficult for users to know which zone they are in, without having to look at their mobile phones constantly – which is not safe and not practical. I wish that operators come up with a creative solution to address this issue. Regular users of micromobility in Asia reported on constantly changing parking zones. In some cases, users couldn’t end their ride, though being in a parking zone or when they return the vehicles to the same place where they picked the vehicles from. Here are some of the user comments:

Users of micromobility, use them to save time, ditching other modes of transport. It should be a primary focus for operators to ensure that the entire experience is smooth and takes less time. As I always say, if you are a micromobility operator and if you don’t have a) time from App open to start ride b) time from arrival at the destination to end ride, as key KPI’s that you monitor for a ride, you are doing something wrong!