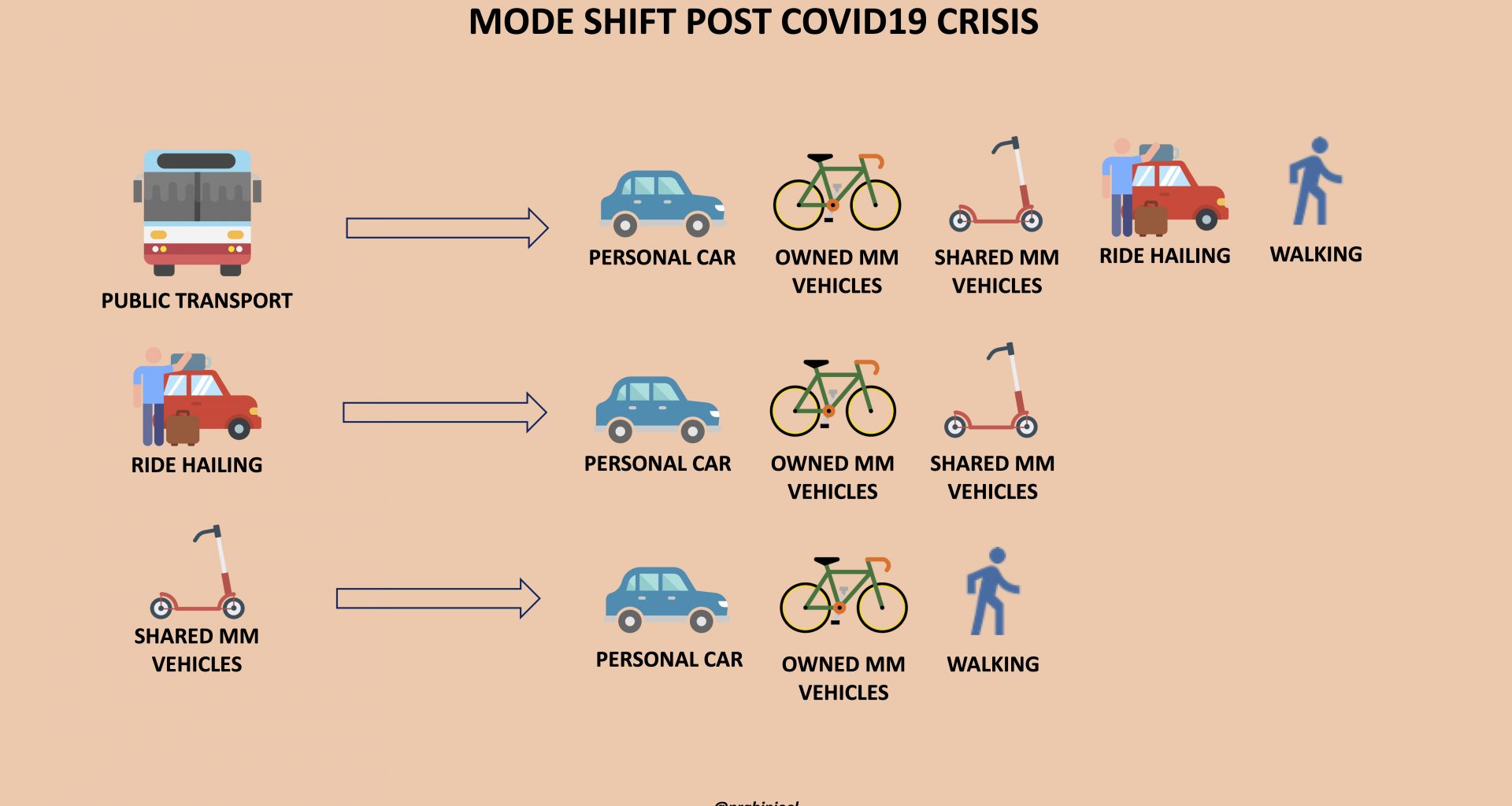 Last two years saw many Micromobility companies rise and fall, with a bunch of them raising sufficient capital to push forward through 2020. This year is very important for these companies, as the ones that survived 2019, are armed with lessons learnt and sufficient funding – with some of them, including LIME, hoping to be profitable this year.

Current situation with Coronavirus spread wasn’t anticipated until early February and now, has impacted not just mobility, but all industries across the globe. Micromobility is hugely impacted with the curfews and lockdowns in most of the cities. As of this writing, all operators have scaled down their operations, if not completely halting their services. The companies that survive this crisis, have a tremendous amount of work to do, to get back to pre-COVID19 numbers.

Here are some of my thoughts on how this will impact Micromobility.

With so much emphasis on social distancing and surface contamination, post crisis, people would be cautious in taking any transport mode that confines you in a closed space with strangers – all forms of public transport (busses, trams, metro, train, airplanes, etc) and ride share (car sharing, carpool, shuttles, etc.).

Horace Dediu, recently wrote a piece on the Micromobility Industries Blog, taking inspiration from N.N. Taleb’s concept of “Antifragility”. History has proven time and again that the Human race has always emerged stronger after any disaster – war, pandemic, natural calamities, etc. Post crisis, there was always an accelerated growth in the economy and technological advancements. Twentieth century had multiple examples of this phenomenon. If you look at the time around the Spanish Flu of 1918, after a slump in automobile production, we saw an accelerated growth in the following years across the globe. Same is the case after World War II and the recession of 2008.

Post COVID19, we would see a similar trend in all sectors, including micromobility – both shared and owned. With, customers moving from public transport to micromobility, we will see a spike in shared micromobility usage and in the sales of personal micromobility vehicles.

If you look at the Uncertainty Avoidance Index (UAI) defined in Hofstede’s cultural dimensions, there are some countries with higher UAI and specifically for owned micromobility vehicles like e-bikes and e-scooters, countries will higher Uncertainty Avoidance Index will see more users shifting from public transport to owned vehicles. For e-bike OEM’s, it is important that they identify these countries/geographies to focus on their sales efforts.

A look back into the years after the Spanish flu of 1918-1920 should generally give us a good idea on how people approached mobility post crisis. Unfortunately, I did not find enough year by year data. What I managed to find are limited data from the US and Britain. Presenting them here as some data is better than no data.

In the 1981 edition of the Transit Factbook published by American Public Transit Association (APTA), there is no evident drop in transit ridership. the biggest drop before 1950 was around the Great Depression, where people did not have jobs and many did not have the means to travel.

In a paper published by Pooley, Colin and Turnbull in 2000 titled “Commuting, Transport and Urban Form: Manchester and Glasgow in the Mid-Twentieth Century”, the authors presented some data on the mobility modeshare for each decade of the 20th century. For clarity, I combined the data into three modes – Public Transit, Personal Vehicles and Walking. In the cities studied, the decade immediately after the Spanish flu did not see public transit share increasing, but stable at ~46%. In the same time, the percentage of personal vehicles in the modeshare increased, mostly taking away people from walking.

Though I don’t have concrete data to prove my point, the limited data available suggests that in countries with lower Uncertainty Avoidance Index, there was no significant impact on public transit usage.

For shared micromobility, though operators will see new users moving from public transport, the challenge is in keeping existing users from moving back to cars or to owned micromobility vehicles. We will see few operators trying to get a share of the owned micromobility market as well – adopting models similar to what Bird did in San Francisco, Tier did in Germany with myTier or the now popular Swapfiets model.

This crisis also taught an important lesson that having the sharing business as the sole revenue generator is not ideal. Operators will increasingly add new services that will reduce the impact of those winter months. There are few examples already, with Bird Pay and Bird Platform.

Though it is important to manage the current situation and make sure the company survives, it is also important to have a post-crisis plan. Companies that have a good plan, will raise enough capital and have a steady growth – beating pre-crisis numbers. I hope to see most survive!

@prabinjoel
653 Following
1K Followers
Not surprised! https://t.co/m2QJo3hxmk
3 hours ago
In some parts of Australia, if you use an electric car, your emissions would be ~150 to 200g CO2e/km. Most IC engi… https://t.co/phvJ6OLd8C
23 hours ago
Follow