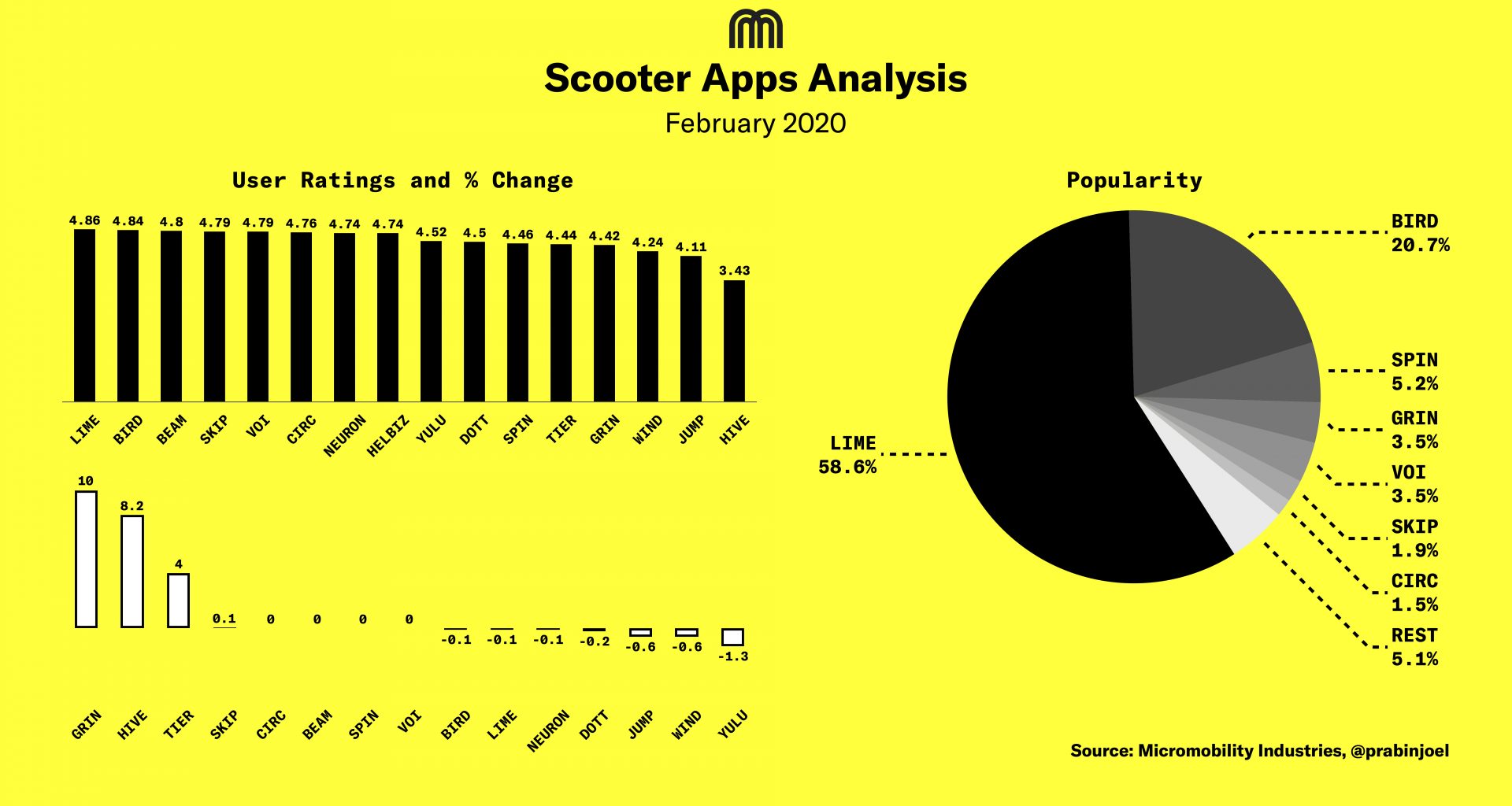 Before we get in to the update, I’m happy to announce my Content collaboration with Micromobility Industries. From now on, you will see the monthly updates in better graphics on all channels. If you haven’t subscribed to their newsletter yet, do subscribe here.

Similar to previous months, in February, Lime retained the top spot in average user ratings among scooter companies in the Apple and Google app stores (4.86/5). Lime also continued its reign as the most popular of all operators worldwide in terms of activity in the app stores.

Other apps saw improvements in user satisfaction in February, reversing a trend earlier this winter, when user ratings were stagnant across the board. The average user ratings jumped 10% for Grin, 8.2% for Hive, and 4% for Tier last month. For Grin, this was the first positive growth in months. Although Hive is still trailing far behind others, it has been steadily improving its rating over the last two months, suggesting the service is making much-needed changes.

In terms of popularity, as measured by activity in the app stores, Neuron Mobility saw the highest increase (23%) last month, followed by Hive (12%).

Going through all user reported issues in February from the comment section, most of the issues can be grouped under the following:

App Issue – 34%: Issues and Bugs related to the sharing app is the most reported in February, similar to the previous month. Users reported issues in login, time to load, payment setup, etc. Here are some of the comments:

Scooter Issue – 12%: Scooter issues are common, with reports on failing brakes, low battery, scooters shutting down mid way. This time, there were two incidences where an accident was reported. Both were from SPIN, where one user reported to have broken an arm. Here are some of the comments:

There are few operators that provide a mobile holder/charger attached to the scooter stem. A WIND user reported that a faulty holder resulted in a broken phone.

Overcharging – 11%: Many users reported that they were overcharged, more that what they expected for the ride. Few users also reported that cash was debited from their accounts without authorisation.

Cannot Start/End Ride – 14%: There seems to be an improvement in ‘Start Ride’, where only 4% of the comments were related to Starting a ride (vs 12% in Jan).

Customer Support, Unavailable Scooters, Expensive, Others – 29%: Interestingly, users reported less on lack of Customer support (3%). European operators seem to respond to more comments in the App Store vs others.

One user reported via the App Store that his pregnant wife was hit by a speeding JUMP bike on a sidewalk.

If you are in scooter sharing business, spend some time in analysing user comments of all players. –> A treasure trove that would help you serve better!