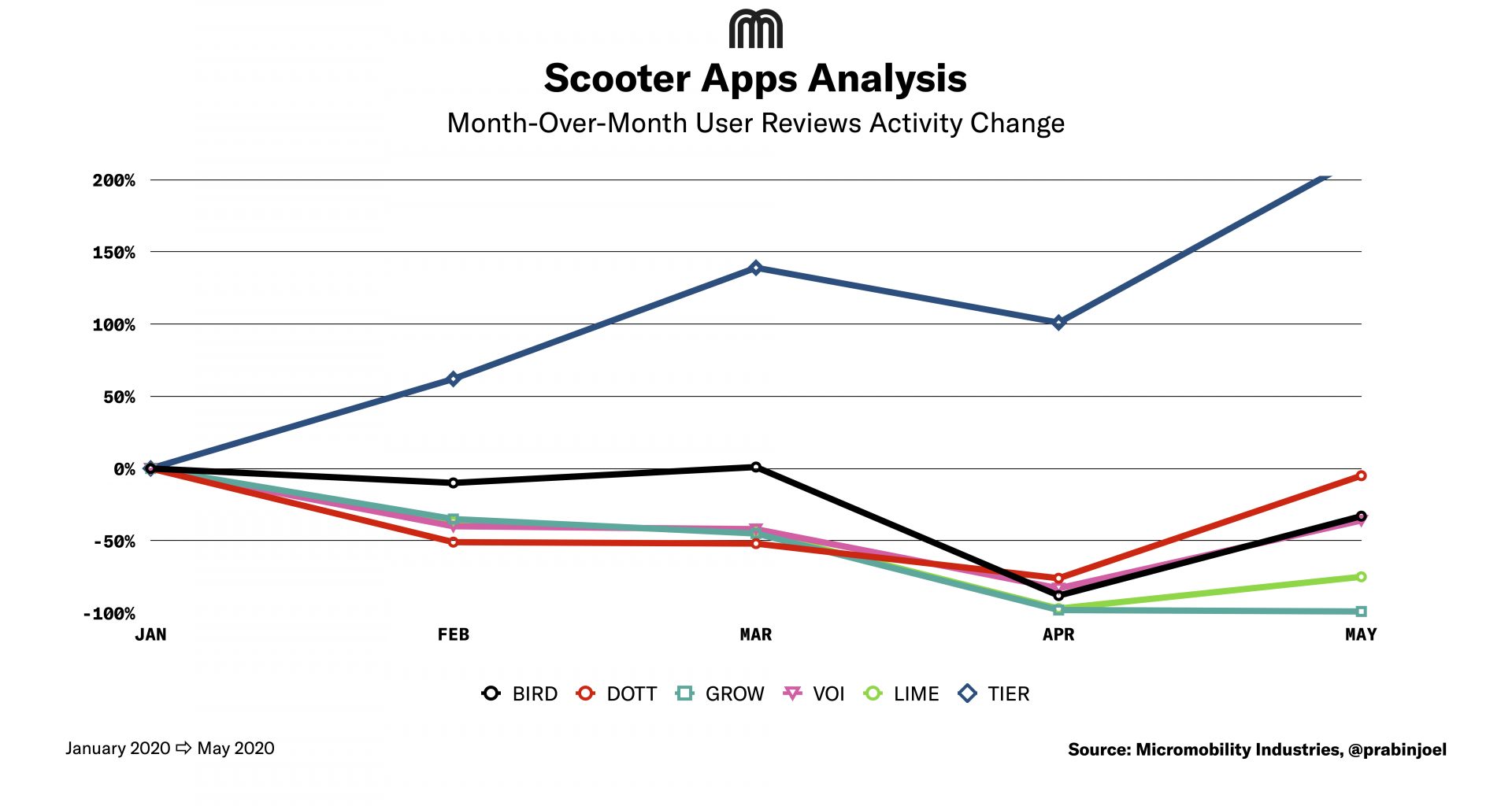 After being struck by the one-two punch of the Covid-19 pandemic and ensuing global lockdown in March and April, last month there were tentative signs that the demand for micromobility started to return.

The total number of new app store reviews shot up by 264% in May as cities relaxed quarantines and people were allowed to travel more freely. This represents a major reversal from the previous month, when the number of reviews slipped 86%. With Lime unfreezing its operations and returning scooters to many of its markets, its number of app store reviews increased the most (787%), followed by Bird (452%). Latin American operator Grin was the only operator that received fewer reviews in May than it did in April (-49%), perhaps owing to ongoing lockdowns in its core markets.

(Note: I am no longer tracking Hive and Jump’s performances, as both operators were recently acquired and incorporated into the FreeNow and Lime apps, respectively.)

Using January as a baseline, the number of app store reviews has declined for every single operator this year except for Tier, whose activity has defied all trends and gone up an incredible 216%. Dott, which saw a decline of only about 5% during that same period, has fared better than most, although nowhere as well as Tier. Grin’s activity is down close to 99% compared to January, putting it last among all providers.

Lastly, Lime had the highest user-satisfaction rating of any micromobility app in May (4.86/5), followed closely by Bird (4.83/5). Overall user satisfaction remained very stable compared to April, with only minor fluctuations in the ratings. Tier saw an increase of 1% in user satisfaction, followed by Wind (0.8%). The Indian moped-sharing company Yulu saw a decline of -1.3%, followed by Voi (-0.4%).

Although Lime ranked the best globally, in some key European markets, local players scored higher in customer experience. In Germany and France Voi had a higher NPS than Lime. On the contrary, in Sweden, both Bird and Lime scored higher than their European rivals. Lime led in the U.S, Italy Spain as well as Australia.

Though NPS scores don’t change much month to month, Tier’s rating notably did go up 3 points since April.

App Issue – 35%: Similar to in past months, issues with the apps themselves were the most commonly reported problems. Users reported trouble with signup, time to load, and payment setup, among other things. Here are some of illustrative or interesting user comments:

Users continued to complain that the Bird app asked them for access to their phone’s microphone. On checking the permissions requested by Bird, there is no explicit mention of microphones, but it could be that camera access is combined with microphone access on some Android devices.

Scooter Issue – 21%: Hardware problems jumped from 13% of total comments in April to 21% in May. Multiple reviewers complained of faulty brakes, including at least two Lime users.

Unable Start/End Ride – 11%: Many users reported being unable to start or end their rides. Yet another Spin rider complained they were not able to end their ride this month.

A Lime rider reported having trouble with locking five times in one month.

And a Bird user said they had to wait for 30 minutes to end a ride.

A few users found the services too expensive and or reported having trouble with customer care. Similar to previous months, there were multiple reports from Yulu users about getting their security deposit refunded.

Here is a comment from a Lime user who did not receive a response after seven complaints:

@prabinjoel
656 Following
1K Followers
Microsoft hasn't copied Teams enough yet. We use both Teams and Slack every day and both have distinct use cases.… https://t.co/k1oZ5MJanO
11 hours ago
Another round of layoffs at shared e-scooter company Tier - according to linkedin posts from employees.
16 hours ago
Helbiz ($HLBZ) is considering a reverse stock split to comply with Nasdaq listing rules.
yesterday
Follow