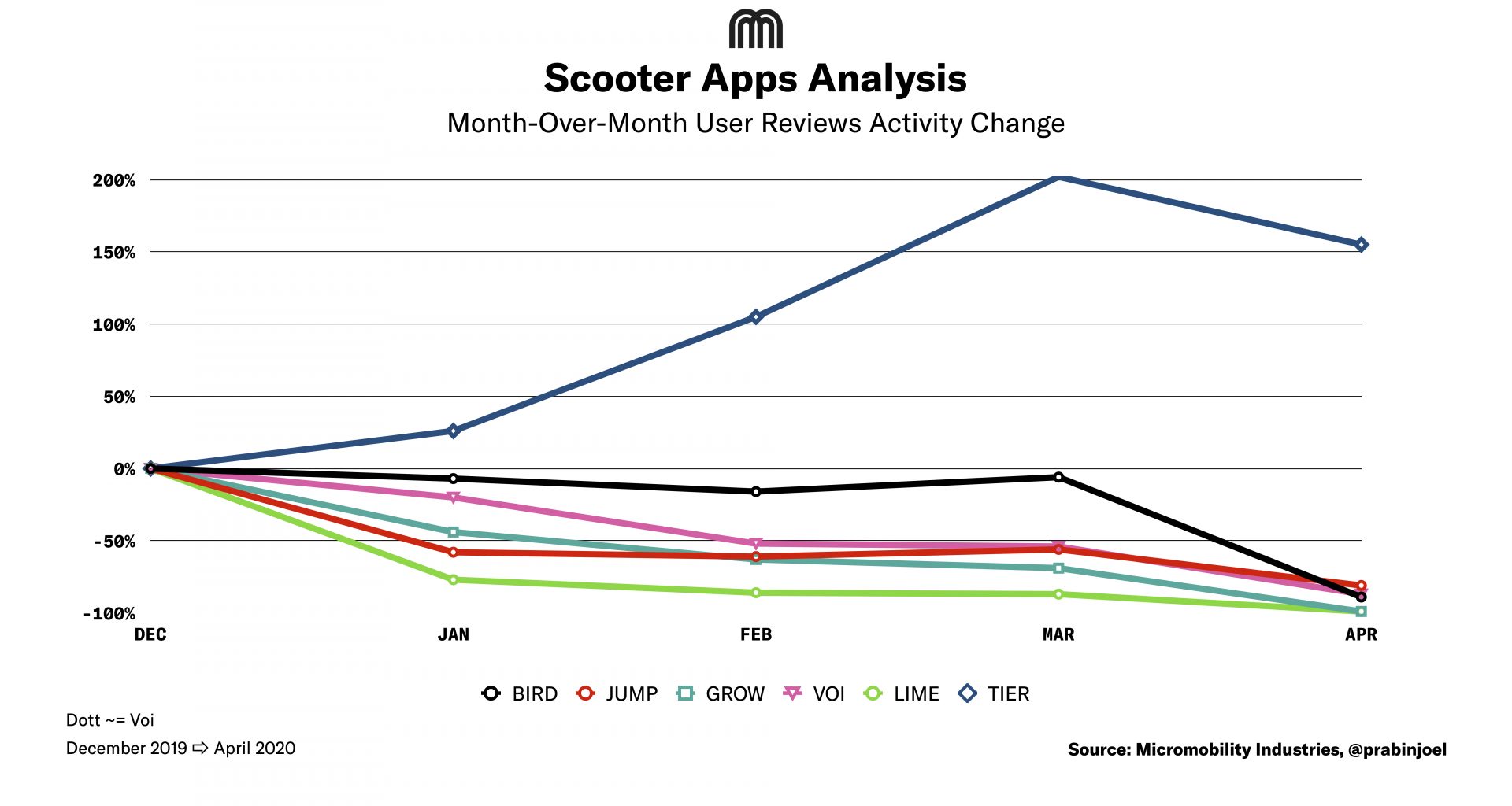 April was the first full month of the Covid-19 pandemic, during which micromobility companies struggled to stay afloat during a global lockdown.

In April, Lime continued to hold the top spot in App Store user ratings (4.86/5), among all micromobility companies. Though Lime also holds the top spot for cumulative App Store activity (58.1%), in April, Tier saw the highest activity in the App Store (21.9%), followed by Bird (18.6%).

The total number of App Store reviews fell 86% compared to March data, most of the cities announced a complete lockdown due to COVID19. Activity of Grin declined the most month-over-month (-96%), followed by Lime (-95%). Though most of the operators saw the App Store activity decline greater than 50%, Tier saw just about 16% decline.

Tier was the most popular app last month, controlling 20.1% of activity globally; It also led in its home market, Germany (60.5%). In France almost all of the activity was concentrated on Dott (97.6%). Voi saw the highest activity compared to others in its home market Sweden. In the US, Spin took the top spot (59.4%).

Keeping December as the baseline, App Store activity declined by at least 75% for every operator except for Tier, whose activity astoundingly went up 155%. Growth such as this during the middle of a pandemic is hard to explain, but it appears Tier has hit on an engagement formula that actually improves on its pre-Covid baseline.

Although Lime ranked the best globally, in some key European markets, local players scored higher in customer experience. In Germany, Italy, Spain and France, Voi or Circ (now part of Bird) had a higher NPS than Lime. On the contrary, in Sweden, both Bird and Lime scored higher than their European rivals. Lime led in the U.S. as well as Australia, followed by Bird and Beam, respectively.

Going through all user-reported issues in April from the App Stores’ comment sections, most of scooter issues can be grouped into the following categories:

From this month, ‘Others’ category will be omitted to have more focus not the categorisable issues.

App Issue – 36%: Bugs related to the sharing app were the most-reported user problem in March, similar to the previous month (28%). Users reported issues with time to load, login, payment setup, and more. Here are some of the user comments:

Using mobile number for authentication is very common in micromobility and it comes with mobile number recycling issue, if it is not handled. A Jump user reported a login issues linked to this.

Overcharging – 14%: There were multiple reports across operators on charging over what it should be for a ride. A lime user reported being charged, without having used the app for over a year.

Unable to Start/End Ride – 17%: Similar to previous months, users reported issues with Starting and Ending Rides. At least two Spin users reported to have waited ~7mins to end the ride, which is not ideal. Normally, users are penalised for End Ride issues, where the additional minutes cost more than the ride itself.

Customer Support, Cost – 19%: Few users found the service expensive, with one SKIP user complaining about a flat minimum fee. There were also reports on bad customer service, with multiple Yulu users reporting issues with the refund of a security deposit.

In addition to all user comments, this time, Bird saw few angry users, not happy with the way Bird dealt with the recent job cuts.

How much did Bird and Lime pay for their scooters? - Segway/Ninebot IPO facts

@prabinjoel
510 Following
796 Followers
Job creation should be our focus for the next years to help those people that lost their livelihoods during the pan… https://t.co/yglLUcoWsK
16 hours ago
When working from home, positive impacts of smart lights that mimic sunlight are underestimated. Buying a bunch of… https://t.co/VAFljI9BAi
21 hours ago
lol! :D https://t.co/B5nvLeBU0l
yesterday
Follow